Best Fish Finder for a Huge Catch of Fish: Top 5 Reviews of 2018

A breakthrough in today’s technological world is the fish finder. It has become an important technological device that makes fishing easier and more fun. Take your next fishing adventure to the next level with the best fish finder.

What is a fish finder

A fish finder is a device used to locate fish underwater. It works using the Sound Navigation and Ranging (SONAR) system, by detecting waves of sound energy. Sport and commercial fishermen alike use a fish finder to see a graphic representation of what is beneath the boat.

The fish finder has been constantly improved, upgraded, and modernized. Nowadays, a modern fish finder is developed to allow a high degree of integration among different systems, which makes it a more reliable and effective device.

This kind of fish finder is the most basic, only allowing fishermen to see what is below the boat or underwater, and might not be rich in features.

Also known as the Chartplotter, this kind of fish finder is more upgraded, with additional features such as GPS for navigation, a split-screen, and a black box.

This kind is a highly developed fishfinder with upgraded features, such as multiple display systems, a powerful GPS support, and connectivity through Bluetooth or Wi-Fi, which allows fishermen to operate the fish finder from Android and iOS phones.

Things to Consider In Choosing A Fish Finder

Before buying a fishfinder, there are certain important things that must be considered first. Below is a rundown of the five (5) things to consider when choosing the best fish finder for you:

1. Fishing location and depth of the water

There are a variety of locations where fishing can be held. One may go out for fishing in an inland body of water such as a small lake. In this case, there might be no need for a highly developed fishfinder, and a standalone fishfinder would be the right choice.

In other scenarios, if you go out for fishing in the deep oceans, you may need a more upgraded fish finder, one with a networked system might be the right choice.

The transducer is the main part of the fish finder. It sends sound waves or sonar signals into the water and picks up the signal that bounces off of the objects underwater. The signal is then translated into a visual image.

Aside from the size and the quality of the transducer, the mounting of the transducer also has a dramatic impact on how well the fish finder performs. There are generally three mounting choices: shoot-through, through-hull, and transom mount.

The frequency of the fish finder dictates the details to be transmitted to the screen. With higher frequencies come more sonar waves being sent out and received by the transducer.

Thus, the higher the frequency, the more information from sonar waves will be transmitted. Higher frequencies work best in shallow waters, while low frequencies are better for fishing in deep waters.

The frequency is directly related to the angle of the cone. The cone angle of the fish finder determines the coverage of the signal. The deeper the water, the wider the cone will get. However, as the cone gets wider with depth, sensitivity decreases.

Some advanced fishermen use fish finders with multiple frequencies and cone angles, which allows them to switch between broader, more general views and narrow, more detailed views, and to cover different angles.

Power is an essential feature to consider when choosing a fish finder. It determines how fast the sonar can operate, such that higher power (or wattage) gives a faster speed of displaying readings or results.

Generally, fish finders can display readings of up to 400 feet for every 100 watts. Thus, if you are fishing in deep bodies of water, a fish finder with more power might be the best choice. While for shallow waters, those with lower power might be enough.

Advancement of technology has led to the upgrade of fish finders. Today, many fish finders have colored screens, and this is a huge advantage over black-and-white screens. Full-color screens show details that are clearer.

In choosing a fishfinder, screen resolution, and size must be taken in into account. Screens with higher resolution provide a more detailed and clearer picture, and large screens will make it easier to read the data and to pinpoint exact spots.

Below, you will find more detailed reviews, but you can also click the links above to see current prices and read customer reviews on Amazon. 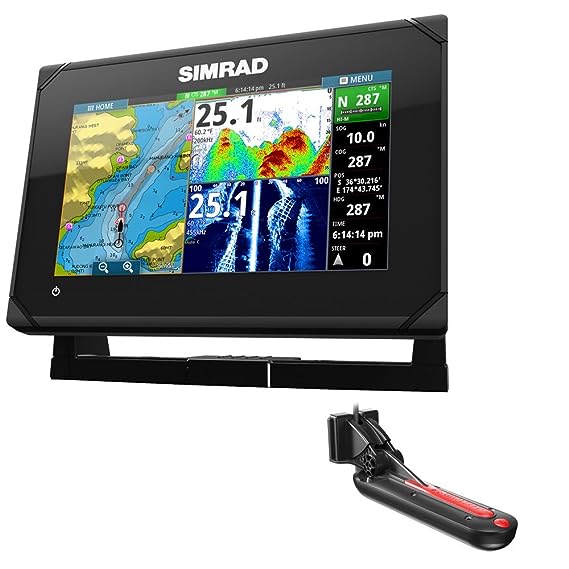 Get more from underwater with the Simrad GO7 XSE Chartplotter.

Its multi-touch display is easy to use and offers true ease of use with controls that tablet and smartphone users might find familiar: tap to select waypoints, pinch to zoom in or out, and tap and drag to smoothly move across.

It also has a split-screen view, and the home screen can be customized, such that shortcuts can be created for features that you most frequently use. This makes different functions easier and more accessible.

Simrad GO7 XSE’s built-in 10 Hz GPS receiver updates your position ten times each second, which is ideal even for fast-moving boats. With this, your movement is tracked accurately and smoothly, without lags.

You can also easily set and record destinations. The waypoint management feature allows marking waypoints, which helps you navigate more confidently to places near and far.

In addition, Simrad GO7 XSE has a built-in sonar that allows real-time depth tracking, which offers a picture-like view of the bottom beneath your boat.

It also has CHIRP sonar, a forward-looking sonar technology, and a side-scan sonar imaging, which provides an image of the structures and objects beneath and around the boat.

These are very useful especially when you are navigating through unfamiliar and poorly-charted waters. 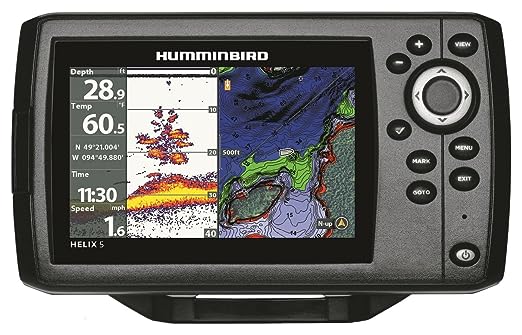 Take your fishing adventure to the next level with Humminbird HELIX 5s new user interface and operating system. It features a 5-256 color display with backlight, which is great for clear and vivid viewing experience.

It also proudly features a precision internal GPS Chartplotting with built-in UniMap cartography, and a microSD card slot, which is great for optional maps or for saving marked waypoints.

The Humminbird HELIX 5 also features a CHIRP DualBeam PLUS sonar with 4000 watts peak to peak power output, which allows the sonar to operate faster, thus, giving a faster rate of displaying information or readings. 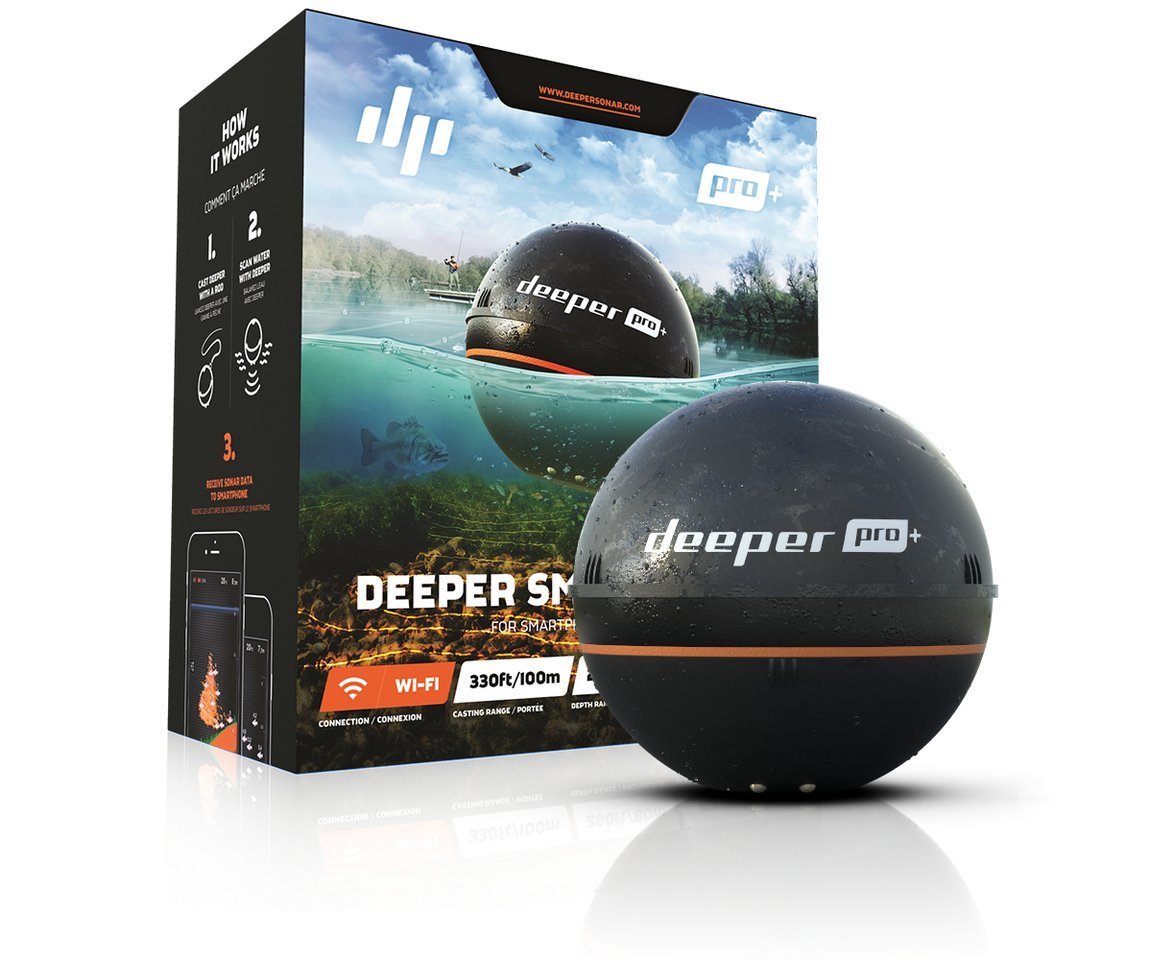 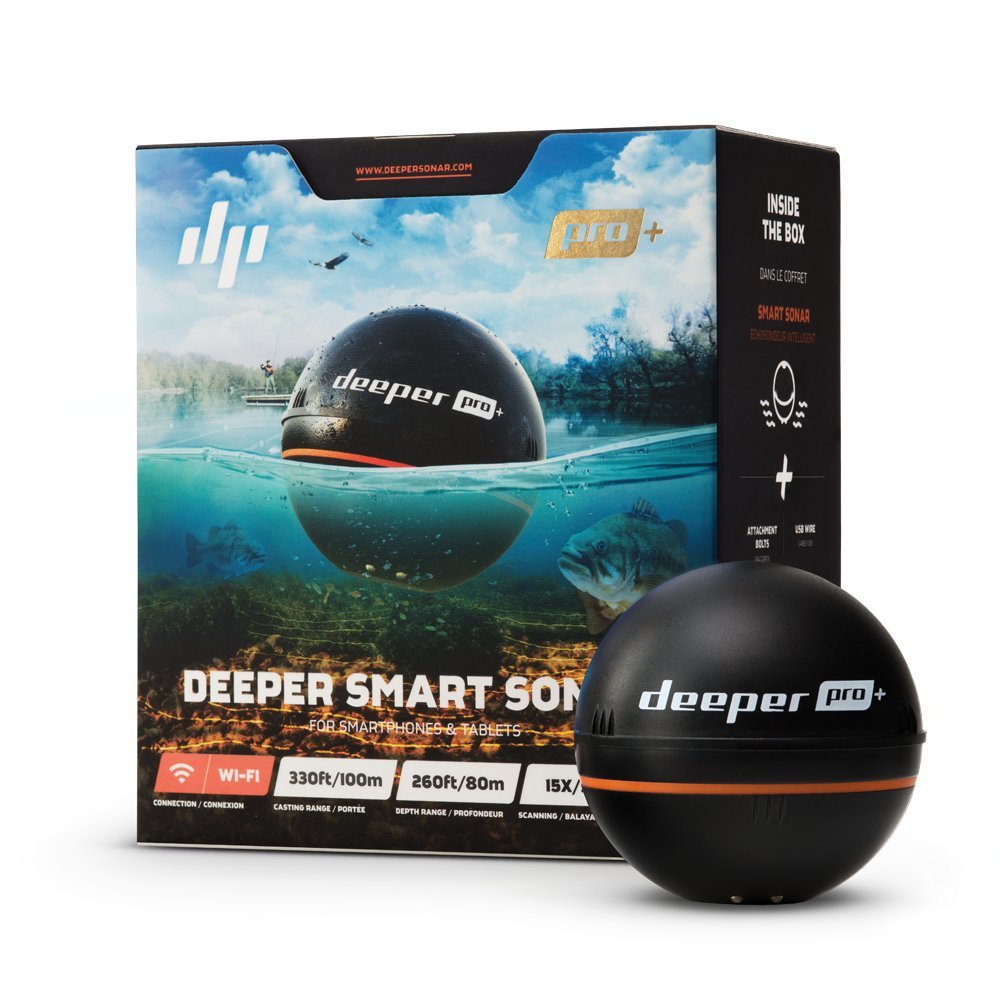 Suitable for all fishing types, Deeper Smart Sonar PRO+ is the ultimate in smart sonar fishing.

Boasting a highly accurate internal GPS receiver, it turns your Deeper into a mapping device that allows you to create real-time detailed maps of the sites you are fishing from both on and offshore.

Its high-precision scanning feature ranges at depths from 2 ft down to 260 ft, which is great and ideal for extreme conditions and the most demanding anglers.

It is also equipped with high-grade components that offer a dynamic range and high-quality scanning resolution. With this, you will be able to see, identify, and analyze smaller underwater objects.

With its built-in Wi-Fi connection, Deeper Smart Sonar PRO+ ensures accuracy in data transmission to your tablet or smartphone and has the furthest range of any castable sonar on the market.

No need for a Wi-Fi connection or mobile data at your fishing location, thanks to its internal Wi-Fi access point.

The Deeper App, which is compatible with most android and iOS devices, operates in online and offline mode and provides functional features such as Camera, Offline Maps, Weather Forecast, Day/Night Screen Color Mode, and many other useful features. 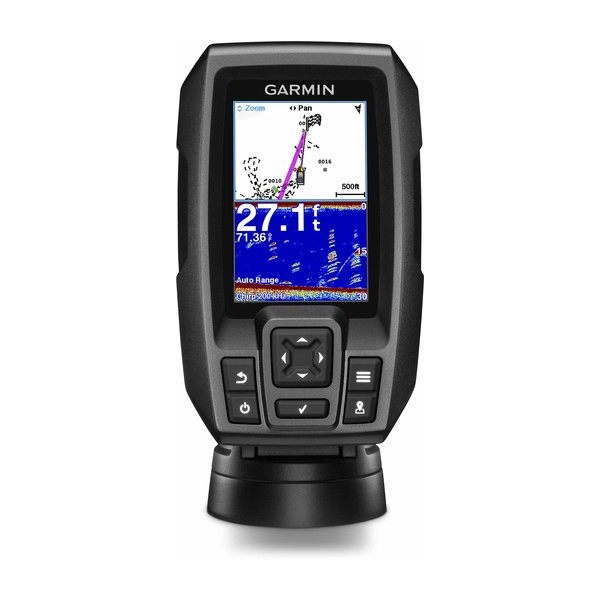 Fishing could be so much easier with the 3.5-inch Garmin Striker 4. Unlike regular fishfinders, the Garmin Striker 4 comes with a built-in, high-sensitivity GPS, that locate current position precisely and quickly, then maintain GPS location as you go.

The GPS comes in handy for not just locating fish, but also marking hot spots and docks. The sonar history rewind allows you to go back through sonar images to mark waypoints you might have missed along the way.

It can also be used to see your position relative to waypoints you have marked. This would have been really useful to avoid getting lost, to return to hot spots in the future, and to find your way back to the ramp.

Does this product also have Smooth Scaling graphics, which is great because it provides uninterrupted imagery, displaying detailed and colored graphics. It also includes a Garmin CHIRP transducer which provides a higher level of detail and clarity. In addition, you can also check your speed on the screen of the Garmin Striker 4.

This feature is a great tool in making sure that you are at the right speed for particular fish species, for the lure you are using, and for when you are in some controlled or speed-restricted areas. 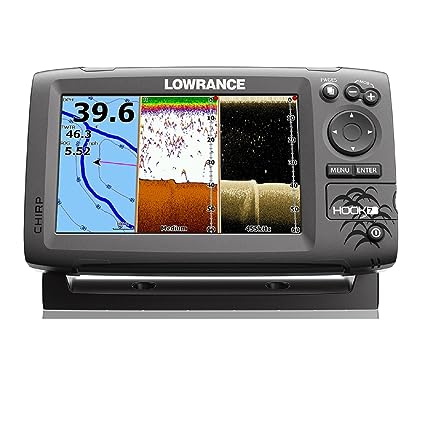 It also boasts a CHIRP sonar plus DownScan Imaging, the edge of today’s leading fishfinder technology, which is great because it gives you a vivid and holistic view of what is beneath your boat.

It also features a multi-window display, which would be very helpful when choosing from pre-set page layouts.

The Lowrance HOOK 7 features a built-in GPS antenna. It is highly accurate and detailed; it includes coastal contours up to a thousand feet and 3,000 rivers and lakes of the United States. Its proven navigation features also make it easier to revisit favorite fishing hot spots.

There is a wide variety of selection of fish finders in the market, and choosing the best one might be overwhelming. With all five considerations taken into account, we believe that among the fish finders reviewed, the Garmin Striker 4 is the best fish finder.

Aside from its highly accurate GPS that allows precise locating and marking of positions and waypoints, it also boasts its feature of being able to check your speed.

Its relatively small screen is well compensated by its Smooth Scaling graphics and Garmin CHIRP transducer that provides uninterrupted colored graphics, and a higher level of detail and clarity. The Garmin Striker 4 could take your fishing venture to the next level.

Let us know what you think on the comments section below, and if you find this post helpful, we would greatly appreciate if you share this post.