The above is a well-known Chinese proverb which is applicable from the past until today. Fishing is really a decent job that anyone can do and in fact, millions of families all around the world get their food and live with this kind of job.

Aside from being a great job, it is also a good way to relieve your stress, have fun and relax from your busy schedule. It is an exciting activity which your friends and family will love.

But before fishing out, you need to know first what are the things you need in fishing. In this article, we are going to focus on the top 7 most awesome types of reels for your fishing convenience.

List of the Top 7 Most Awesome Types of Reels 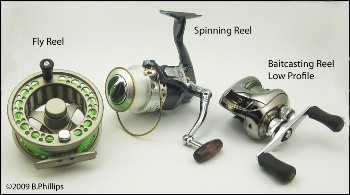 Speencast reel, also known as a closed face reel, is popular among most young and inexperienced anglers when they are starting to learn how to fish.

It is a kind of spinning reels, with an enclosed spool, which uses a rotating cup that winds the line onto the spool. It is designed with the concept of free spool priority.

It is so easy to use, all you have to do is to press and hold the button, rear back to cast, and as you are moving forward, you need to let go the button.

If you do not want to let your cast to go further, you just need to hit the button again to stop your cast. The line is enclosed which means the spool is smaller and let you carry less at first that is why it is an excellent reel for beginner anglers.

Baitcasting reels are often used by experienced anglers and fishermen. These are big-faced reels that are best for heavier-pound test line and in casting heavier lure.

The spool rotates while you cast, which allows the anglers to feather the spool for accurate placement of lures. These are the most accurate reels that you can use.

You can also have more powerful control, better balance and good in one hand operation using these reels. You need to have a lot of practice to get used to this reel because it has a tendency to backlash. Using it also requires more patience, experience, and skill.

These reels are good for catching large catfish, freshwater fish and any other large fish.

Fishing rods with spinning reels set up on the holder

Spinning reel, also known as the opened-face reel, is one of the most popular reels among newbies and can usually be found easily on the market. It is the most common type of fishing reel in which the younger generation and anglers prefer to use.

It has a fixed spool, unlike the baitcasting reel, which is not capable of overrunning and doesn’t have problems with backlashes.

This reel is versatile, the main reason why most people love it. It is good at catching fish from small to medium sizes, but not so good in catching larger or heavy fish.

Fishing with trolling reel in the Andaman Sea, Thailand

Conventional or Trolling reels are very similar to baitcasting reels. The term trolling is actually a method of fishing. Trolling is a technique of angling wherein anglers use lines with hook-rigged lures that are being dragged behind the boat which entice the fish.

These reels have three basic features: the line braking system, which is good for fighting large fish; an on/offline lever; and a clicker, a line out of alarm. These reels are designed to be heavy-duty, good for catching bigger fish.

The problem with this kind of reel is that it has heavy solid spools which have more kinetic energy than lighter spools. It means it is more difficult to control as it needs more opposing force to slow or stop the spool.

Fly reels have more distinct features than the other reels mentioned above. The main use of this kind of reel is to hold the line and provide drag as the fish runs. These are available in different forms varying from tapered sections to a floating and sinking type.

Fly reels have a disc-type drag system which allows the angler to easily adjust the range using the combination of the reel and the rod to have a powerful control to a large game fish.

In a forward cast, which is the most common type of casting, the angler begins to strip the line off the reel with one hand while moving the rod in back and forth motions over the shoulder.

Its main objective is to have a great casting distance by loading it with energy and transferring it to the fly line.

You also need to remember that these reels are designed to carry a specific weight of line and if you are unsure of what you need, it is better to ask help from local stores or anglers.

Saltwater spinning reels are similar to other common reels. They have two classifications such as high-speed and low-speed reels.

The internal gear of these reels is made of special alloys which are corrosion resistant and are best to use in a bad condition such as in saltwater.

Lever drag reel on a boat

Lever drag reel, as the name itself suggests, has a more precise drag manipulation than any other types of reels. You can easily control the reel as a fish tries to fight without worrying about breaking the line.

Strike set, a known value like a full drag setting is a nice feature of these reels. You can differ the drag and know accurately what the setting is by using strike setting. You never need to adjust again, even when you set it for an lb test.

The problem with this reel is that it only focuses on the pressure of the drag and the gear train will still be turning with the spool. 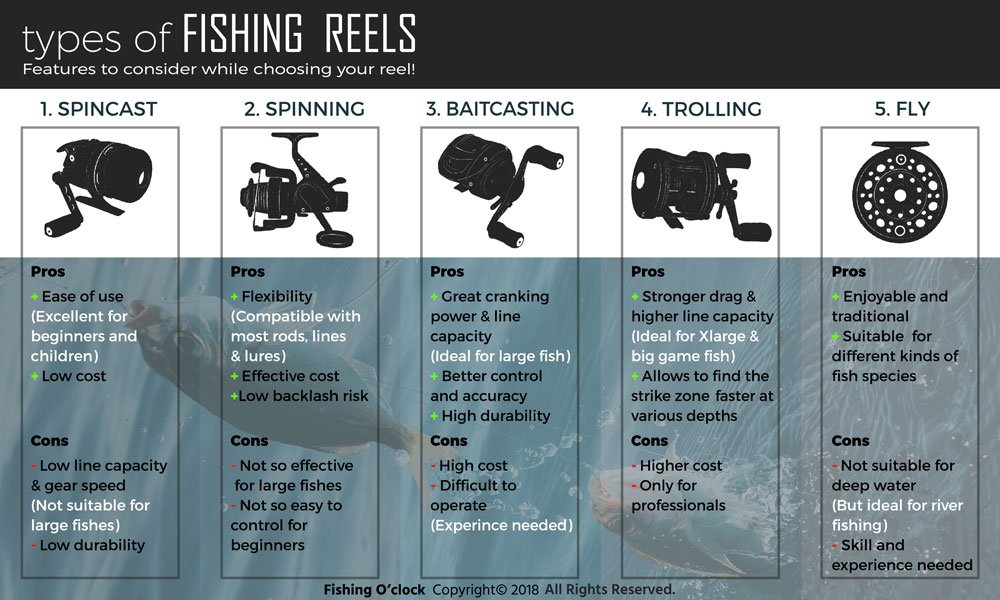 Fishing requires great passion and hard work. For a newbie in fishing, I would choose a spinning reel. It is simple but has great characteristics that will surely help in acquiring more fish. This is one of the most common types of reels in the market so it can easily be found.

On the other hand, baitcasting reel will surely be my best choice for experienced anglers or fishermen as it provides more powerful control and can catch large fish.

What about you? Which among the lists do you own What kind of technique do you employ using your reel We will be happy reading your reels down the comment section.

If you have suggestions or questions, leave a message in the comment box, we’ll be glad to answer and respond to each one of you. Before catching your next fish, don’t forget to share this article. Enjoy fishing!

Best Fishing Line for Spinning Reels: Tips and Guide of 2018

How To Use Baitcasting Reels With The Overhead Casting Technique

Best Baitcasting Reel Unveiled: Things that You Should Know about

Best Fly Line for Trout: Know What are the Prime Picks in 2018
Best Baitcaster Combo in 2018 (#2 Will Make You A Proud Owner!)
Best Fishing Line for Spinning Reels: Tips and Guide of 2018
Best Ultralight Spinning Reel In The Market Now Which Will Make Your Pocket Happy
How To Use Baitcasting Reels With The Overhead Casting Technique
Best Baitcasting Reel Unveiled: Things that You Should Know about
Best Spinning Reel Under 50 – Why Cheap Doesn’t Always Mean Poor Quality
Best Baitcasting Reel Under 100 – Best Reviews of 2018
Best Saltwater Spinning Reel: Five Best Reviews of 2018
Best Spincast Reel on the Market – Top 5 Products Revealed 2018
Popular Posts
Recent Posts
Best Spincast Reel on the Market – Top 5 Products Revealed 2018 3 comments
Best Ice Fishing Boots for Professional Anglers – 2018 Edition 2 comments
Best Ice Fishing Bibs Reviews to Keep You Warm and Extra Confident 2 comments
The Best Ice Fishing Line of 2018 – Top 5 on the Market 1 comments
A Staple In An Angler’s Tackle Box: The Best Bass Lure 1 comments
How to Choose the best Fishing Kayak 1 comments
How to Snell a Hook the Quickest and Easiest Way 1 comments
Why Do Fish Jump? It’s time to answer this old-aged question 1 comments
Best Castable Fish Finder – A Review of the Best Units in 2018 1 comments
How To Spool A Spinning Reel Like A Master 0 comments
How to Catch a Croaker: Learning the Simple Steps to Catch This Fish May 8, 2018
Best Fly Line for Trout: Know What are the Prime Picks in 2018 May 4, 2018
How to Rig a Senko: 6 Proven Ways for an Effective Fishing April 27, 2018
Best Fishing Shirt – Best Product Reviews and Buying Guide April 23, 2018
Bluegill vs Sunfish: Comparison to Two of Interchanged Fish Terms April 19, 2018
How to Catch Sand Fleas: Master the Various Methods April 13, 2018
Best Kayak Fish Finders for a Better Fishing Experience April 6, 2018
How to Rig a Slip Bobber: Learn the Effective Way to Use a Slip Bobber April 3, 2018
Best Fishing Wader Top 5 Choices on The Market for 2018 March 27, 2018
Best Fishing Hat: Top 5 Picks On The Market For 2018 March 13, 2018